Curious to learn more? Let us know! We'll follow up over email to schedule a 30-minute introduction to Parlor's URM.

How Transparent Language aligned its entire company around product operations.

Evan Quinlan has led Product Management at Transparent Language for nearly 10 years. Transparent Language is an adaptive language learning platform primarily focused on supporting US government and defense organizations – such as the Department of Defense – train uniformed personnel to carry out criticla missions. It's a significantly important product in a high stakes industry  with a user population that is deeply reliant in the outcomes that the product provides.

As such, a lack of user feedback has never been Evan's problem; in fact, you might say that they were drowning in customer needs and internal ideas. Before adopting Parlor, Transparent Language’s primary technology stack was HubSpot for their CRM and Support, Slack for internal collaboration, and Jira for engineering task management. The team would then fill in certain gaps with a collection of other point solutions, such as Survey Monkey for feedback collection, Trello for roadmap management, and a combination of ad hoc customer meetings and user interviews to capture and store insights in Confluence.

“Before Parlor, we were collecting feedback in a hodge-podge of tools, which is so common that I was convinced it was a reasonable practice. Sometimes, things were written in emails, or Survey Monkey, or account records in HubSpot, or just a bunch of anecdotal notes from interviews or calls. It was scattered all over the place. We tried to collect as much of that as we could in Jira, but the result was a massive backlog which ultimately became its own project we just ignored. There was no central place where anyone could just go to see everything customers needed, let alone to actually make sense of which of those items would actually be impactful.”

Because of this, Transparent Language struggled to foster transparency and alignment across its teams. In their direct interactions with customers, the Customer Success team would hear customer needs all the time, but they had no effective process for sharing that information. Evan’s Product organization found it difficult to make sense of the many different anecdotal inputs that other teams were giving them. Without a single source of truth for all customer needs, feedback, and sentiment captured across the company, it was impossible for Transparent Language to accurately measure the real business impact of their customers’ needs. The result: they either found themselves arguing about urgency and priority, or worse, invested too much time and money building expensive duds while ignoring more important and impactful customer needs.Eventually, Transparent Language decided to adopt Parlor’s User Relationship Management system. The first thing Evan’s team did was to consolidate all of that scattered feedback, customer needs, and sentiment being stored in every team and tool in the business into Parlor as a single system of record. This helped Evan’s team immediately understand the most pervasive and impactful customer needs by customer segment and allowed them to ground those needs in measurable business impact, in particular the amount of sales and renewal revenue being blocked by outstanding customer needs.

“Parlor just fills a gap in so many different ways; with Trello, and AirTable, and Excel, and Confluence documents, and Jira, and anything else you can think of. There’s so many ways you can try to sit down and gather all this user feedback coming in from everywhere, and Parlor’s the first tool that I feel like just does it for you.”

The next thing Evan’s team did was get the rest of the organization involved by integrating Parlor into all of the tools they already used to do their jobs. Sales and Support could participate in Parlor directly from HubSpot. Marketing and executives could participate directly from Slack. And Engineering could participate directly from Jira. By effectively engaging the entire organization in the process, Evan expanded his product operations effort into what essentially became Transparent Language’s Voice of the Customer program. Customer-facing teams now felt they had a real voice on behalf of their prospects and paying customers, and Evan’s product team was finally able to stop chasing every shiny new object presented to them.

“Parlor’s already got my co-workers outside of my product management group talking about the product roadmap, which never happened before. The biggest difference now is that Parlor has opened up the product conversation, and the user feedback conversation, and getting everyone involved across departments.”

Although Evan originally believed what he needed was a tool for his Product team to use in a vacuum, the cultural shift at Transparent Language since adopting Parlor’s URM has opened up his mind regarding the value of glue – between disconnected teams, siloed data, redundant tools, and disparate workflows. And when you’re responsible for a product as critical as Transparent Language, you simply don’t have the luxury of not having company-wide alignment around the most important priorities to you most important customers.

“People see Parlor, and they just get it. It immediately sparks a conversation – no matter who it is – and opens up this communication channel that didn’t exist before. And now more than ever, with our team having gone largely remote, Parlor gives the entire TL team a place to go, see what’s happening, and get on the same page about what’s important now and in the future. It’s really invaluable.” 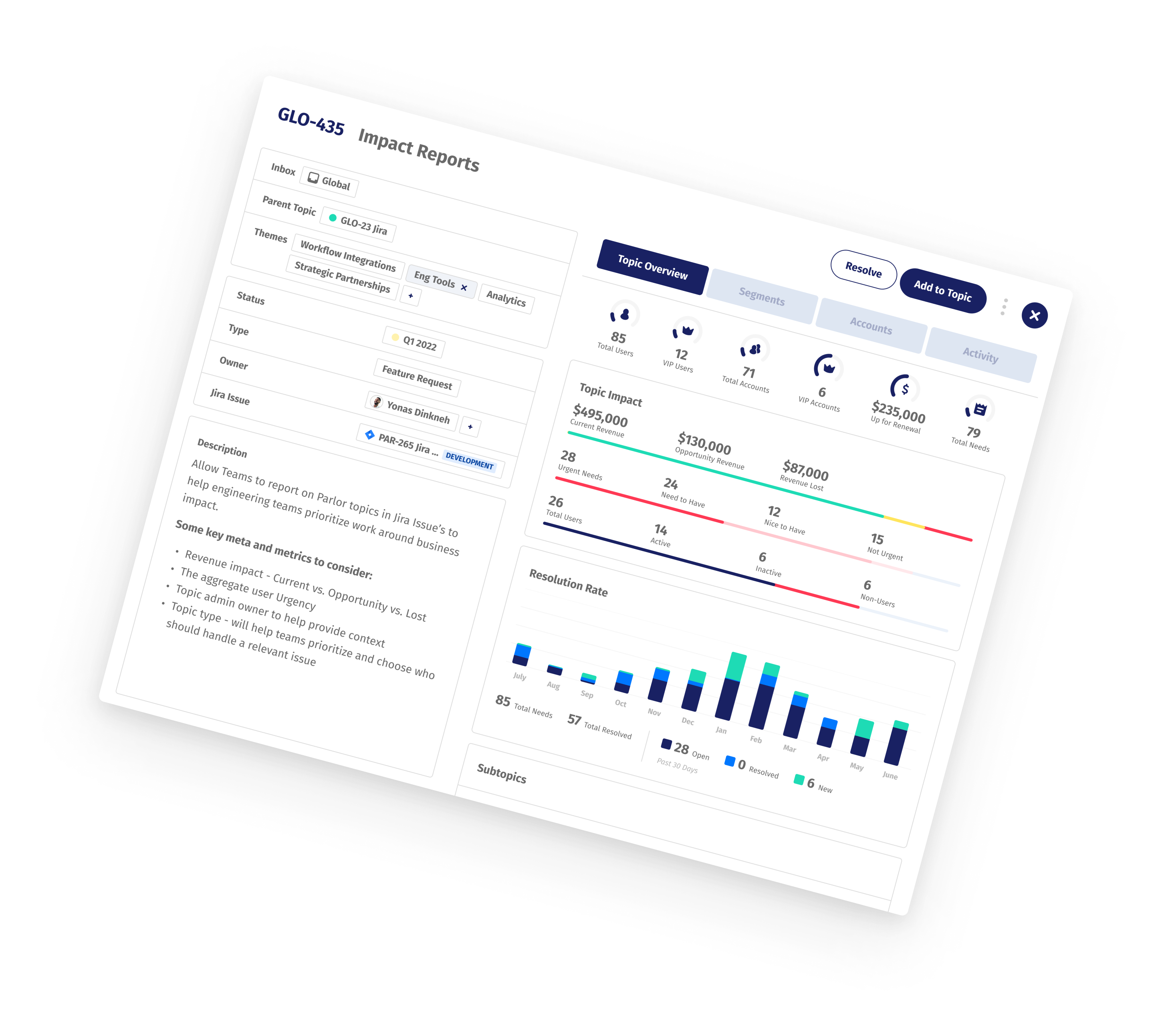 Curious how similar teams at other companies use Parlor’s User Relationship Management system?